Equity and Inclusion Summit for Alumni

The Equity and Inclusion Summit for Alumni is July 2, from 6:30 p.m. - 8:30 p.m.
All constituents are welcome to attend the Keynote by Dr. Eddie Moore between 10 a.m. and 11 a.m on July 2 as well as the Closing Talk by Rosetta Lee between 12:30 p.m. and 1 p.m. The Zoom links for these two separate events will be shared via email on July 1st with those who have registered. 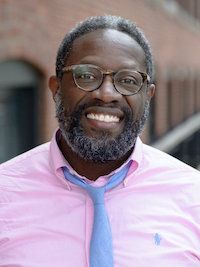 André Robert Lee’s is a Keynote Speaker and Consultant around issues related to Anti-Racism, Inclusion and Diversity for educational and corporate institutions. He is also a Film Maker and uses his films in his keynotes and presentations.

André directed and produced The Prep School Negro and took it on a worldwide tour over the past 10 years. André’s served as producer on the documentary I’m Not Racist…Am I? André received a Fellowship in 2013 and was tasked with Directing and Producing the 12-month series Life Cycles of Inequity: A Colorlines Series on Black Men. André created The Election Effects Project for Spike TV.

André’s next film is called Virtually Free. He directed this story about incarcerated youth in Richmond, Virginia. André has been leading the cause for development of a feature film or series on the life and times of Bayard Rustin. André also teaches Filmmaking at the Germantown Friends School. He has worked with the school to develop a film program for Middle and Upper School. André has been a Professor of writing at The Wharton School of University of Pennsylvania.
Register for Newark Academy's Equity and Inclusion Summit here.